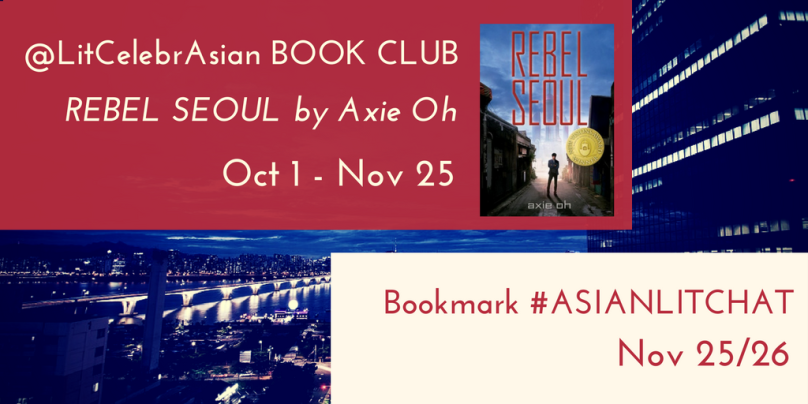 We’re excited to announce REBEL SEOUL by Axie Oh as our book club pick for October and November 2017. Thanks for voting! Come join us and feel free to invite friends for a buddy read. Remember to bookmark #AsianLitChat (a.k.a book club chat) on the last weekend of November (25/26).

Finally, drop by our Goodreads book club group to chat about Rebel Seoul alongside any other Asian Lit books you’re reading over the coming months too!

To learn more about REBEL SEOUL by Axie Oh…

After a great war, the East Pacific is in ruins. In brutal Neo Seoul, where status comes from success in combat, ex-gang member Lee Jaewon is a talented pilot rising in the ranks of the academy. Abandoned as a kid in the slums of Old Seoul by his rebel father, Jaewon desires only to escape his past and prove himself a loyal soldier of the Neo State.

When Jaewon is recruited into the most lucrative weapons development division in Neo Seoul, he is eager to claim his best shot at military glory. But the mission becomes more complicated when he meets Tera, a test subject in the government’s supersoldier project. Tera was trained for one purpose: to pilot one of the lethal God Machines, massive robots for a never-ending war.

With secret orders to report on Tera, Jaewon becomes Tera’s partner, earning her reluctant respect. But as respect turns to love, Jaewon begins to question his loyalty to an oppressive regime that creates weapons out of humans. As the project prepares to go public amidst rumors of a rebellion, Jaewon must decide where he stands—as a soldier of the Neo State, or a rebel of the people.