Jenny’s never had much time for boys, K-pop, or really anything besides her dream of being a professional cellist. But when she finds herself falling for a K-pop idol, she has to decide whether their love is worth the risk. A modern forbidden romance wrapped in the glamorous and exclusive world of K-pop, XOXO is perfect for fans of Jenny Han and Maurene Goo.

Jenny didn’t get to be an award-winning, classically trained cellist without choosing practice over fun. That is, until the night she meets Jaewoo. Mysterious, handsome, and just a little bit tormented, Jaewoo is exactly the kind of distraction Jenny would normally avoid. And yet, she finds herself pulled into spending an unforgettable evening wandering Los Angeles with him on the night before his flight home to South Korea.

With Jaewoo an ocean away, there’s no use in dreaming of what could have been. But when Jenny and her mother move to Seoul to take care of her ailing grandmother, who does she meet at the elite arts academy she’s just been accepted to? Jaewoo.

Finding the dreamy stranger who swept you off your feet in your homeroom is one thing, but Jaewoo isn’t just any student. Turns out, Jaewoo is a member of one of the biggest K-pop bands in the world. And like most K-pop idols, Jaewoo is strictly forbidden from dating anyone.

When a relationship means not only jeopardizing her place at her dream music school but also endangering everything Jaewoo’s worked for, Jenny has to decide once and for all just how much she’s willing to risk for love. XOXO is a new romance that proves chasing your dreams doesn’t have to mean sacrificing your heart, from acclaimed author Axie Oh.

Axie Oh is a first generation Korean American, born in NYC and raised in New Jersey. She studied Korean history and creative writing as an undergrad at the University of California – San Diego and holds an MFA from Lesley University in Writing for Young People. Her passions include K-pop, anime, stationery supplies, and milk tea. She currently resides in Las Vegas, Nevada with her puppy, Toro.

Q: The main character of XOXO, Jenny, plays the cello. Do you have any personal experience playing this instrument? If not, why did you choose the cello in particular?

A: I do not! I did however play instruments all throughout my school years—piano in elementary school, clarinet in middle school band, and the harp in high school orchestra. I chose the cello in particular because I think it’s such a beautiful instrument and one of my favorites to listen to because of its warm and rich tones. My favorite cellists include Nana Ouyang and Hee Young Lim.

Q: XOXO involves multiple characters who are kpop idols. The industry can be a bit opaque even to those who are mega-fans of kpop. How did you go about writing and filling in the blanks to create a convincing portrayal of the idol experience?

A: I wrote this book so that it would feel like a K-drama, so it wasn’t as important for me to make it convincing as to make it entertaining. I wanted to focus on the romance, the friendships, the setting, and culture but with a K-pop hook, similar to how You’re Beautiful is a humorous K-drama about an idol rock group or True Beauty that focuses on high school life but features idols as characters. It definitely helped that I’ve been a fan of K-pop my whole life (my intro group was the 90’s girl group Fin.K.L) so a lot of the K-pop elements were fun for me to write because I could channel that love.

Q: XOXO explores the darker sides of the idol industry in Korea. Did you ever feel like you needed to tone down those aspects or avoid sensationalizing them?

A: I 100% wanted to avoid sensationalizing anything. I wanted to give a well-rounded picture of the industry, and also portray my idol characters existing within the system in different ways, some healthier than others. And maybe because I am Korean diaspora, I also felt protective of K-pop, seeing how it’s sometimes perceived in the U.S. People who aren’t as familiar with the genre sometimes jump to conclusions, and see the “dark side” or negative aspects first, instead of seeing the hard work and genuine love and happiness the music brings to people. I wanted to paint a more nuanced and positive picture in XOXO.

Q: XOXO is a fictional kpop group. Can you introduce each of the four members as they would introduce themselves on a variety show or at a public event?

Q: Did you have a playlist that you listened to while writing this book, and can you give some recommendations for kpop songs that you think fit the book?

A: I have a Spotify playlist! I attempted to match each chapter with a song. You can check it out here: https://open.spotify.com/playlist/5NnM5DIqUhX0u8AxVbMX6X

Q: If you were a member of a kpop group, what role would you take on (this can be realistic or idealized/aspirational)?

A: Realistically I wouldn’t be in a K-pop group, but maybe I could be a manager or stylist! But idealistically, I’d want to be a vocalist. My bias in a group is usually the one whose voice I’m most drawn to because of the way their voice makes me feel when they sing (and the #1 thing I love most about K-pop is the music itself). So for an aspirational role, I would love to be a vocalist.

Q: Part of the story takes place in Los Angeles’ Koreatown. Can you name a few of your favorite Ktown spots or must-see features for anyone who might visit in the future?

A: My *favorite* K-BBQ place is Chosun Galbee. It’s pricey but delicious! I also love the Koreatown Galleria mall and MaDang Courtyard shopping mall! Both malls have K-pop and K-beauty stores! 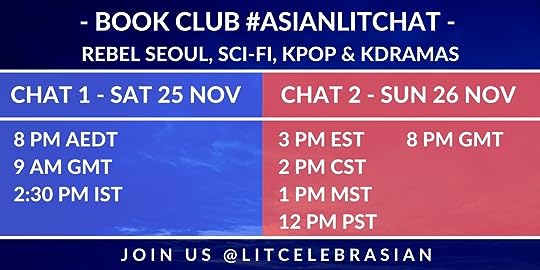 If you’re free on Nov 25/26, join us for any of our spoiler free book club chats below. #AsianLitChat will cover Rebel Seoul by Axie Oh, Science fiction, Kpop and Kdramas!

Boost the announcement on twitter here. If you miss a twitter chat, no worries! We’ll post the questions in our goodreads group on the weekend too.

We will be announcing more reading sprints across multiple timezones in the future, so drop by @LitCelebrAsian via #AsianLitChat on Twitter for updates!

We’re excited to announce REBEL SEOUL by Axie Oh as our book club pick for October and November 2017. Thanks for voting! Come join us and feel free to invite friends for a buddy read. Remember to bookmark #AsianLitChat (a.k.a book club chat) on the last weekend of November (25/26).

Finally, drop by our Goodreads book club group to chat about Rebel Seoul alongside any other Asian Lit books you’re reading over the coming months too!

To learn more about REBEL SEOUL by Axie Oh… END_OF_DOCUMENT_TOKEN_TO_BE_REPLACED