“A new adventure about a girl who is fated to wash the bodies of the dead in this companion to Furthermore.

Our story begins on a frosty night…

Laylee can barely remember the happier times before her beloved mother died. Before her father, driven by grief, lost his wits (and his way). Before she was left as the sole remaining mordeshoor in the village of Whichwood, destined to spend her days washing the bodies of the dead and preparing their souls for the afterlife. It’s become easy to forget and easier still to ignore the way her hands are stiffening and turning silver, just like her hair, and her own ever-increasing loneliness and fear.

But soon, a pair of familiar strangers appears, and Laylee’s world is turned upside down as she rediscovers color, magic, and the healing power of friendship.” 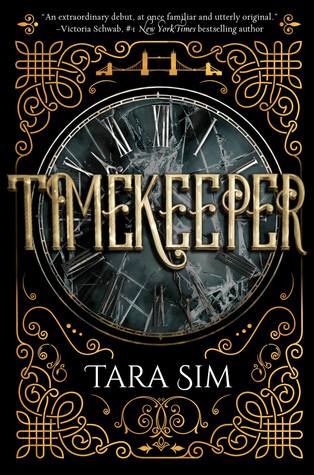 “I was in an accident. I got out. I’m safe now.” An alternate Victorian world controlled by clock towers, where a damaged clock can fracture time—-and a destroyed one can stop it completely. A prodigy mechanic who can repair not only clockwork, but time itself, determined to rescue his father from a Stopped town. A series of mysterious bombings that could jeopardize all of England. A boy who would give anything to relive his past, and one who would give anything to live at all. A romance that will shake the very foundations of time. The first book in a dazzling new steampunk-fantasy trilogy, Timekeeper introduces a magical world of mythology and innovation that readers will never want to leave.”

The Reader by Traci Chee

“Once there was, and one day there will be. This is the beginning of every story.

Sefia lives her life on the run. After her father is viciously murdered, she flees to the forest with her aunt Nin, the only person left she can trust. They survive in the wilderness together, hunting and stealing what they need, forever looking over their shoulders for new threats. But when Nin is kidnapped, Sefia is suddenly on her own, with no way to know who’s taken Nin or where she is. Her only clue is a strange rectangular object that once belonged to her father left behind, something she comes to realize is a book.

Though reading is unheard of in Sefia’s world, she slowly learns, unearthing the book’s closely guarded secrets, which may be the key to Nin’s disappearance and discovering what really happened the day her father was killed. With no time to lose, and the unexpected help of swashbuckling pirates and an enigmatic stranger, Sefia sets out on a dangerous journey to rescue her aunt, using the book as her guide. In the end, she discovers what the book had been trying to tell her all along: Nothing is as it seems, and the end of her story is only the beginning.”

Have you got a favourite among the three? Head over to Twitter and vote now!

Which books do you think we should consider for upcoming book club polls?